There are a few pastries that really impress people.
Soufflé is one of them. Choux pastry is another. Also those fancy multi-layer-texture cakes.

But ya. Choux. It even sounds fancy. Cream puffs, éclairs. Those are just a few familiar choux things. (adding the proper accents for extra fanciness)

I like choux pastry a lot. I like eating them (they are 90% air), I also think they are super fascinating and is a great example of the whole “baking is science” thing. You pipe them out they are some sort of glob of yellow blobs, add heat and they puff up into a little balloon in the oven. How? SCIENCE! Something something steam rises and puff the mixture rise up and bring the pastry with it so they puff up. Which means, however, you are relying on a very specific thing to happen to get the right texture for them. Otherwise… well.

Behold. My first try on choux ever.

Second try is better compare to the first, but they are still not as 3D as they should be. But much better than flat disc!

It is super important to get the mixture right, otherwise you too, can have a lot of flat pastry discs instead of nice, puffy little balls. It took me a few tries but I think I got this now … I think. The first time I made the pastry the recipe says “melt butter in water, then dump it into flour”. Butter actually melt quite readily with some heat, so my water butter mixture was just not hot enough to cook the flour, …. and that somehow affected the ability of the pastry to rise.. maybe? Other recipes I have looked up noted that your water butter mixture needs to be boiling when you dump it into the flour. So make sure the flour gets a decent amount of heat! If it means you need to put it back on the stove to cook, so be it.

For the filling, you can slice the puff into two and put some nice chantilly cream in it. What is chantilly cream you say? It is a fancy word for sweetened whipped cream with some vanilla. You can of course, flavour your whipped cream with fruits, or chocolate. Or it can be filled with ice cream for that extra special treat. …. they all need to keep in the fridge though, and the longer they stay in the fridge, the more you lose the crisp from the pastry. This is the awful thing about choux, you need to eat it almost immediately to get 100% of awesome. They do tend to go soft the longer they sit around, especially after they are filled. I am not going to say it is a bad experience because it surely isn’t, just different.

Anyway!
So because I didn’t want them to be refrigerated, I opted for filling them with a nice creme pat (short for crème pâtissière, aka pastry cream). I have also infused the creme pat with my favourite tea, Prince Vladimir. It is a citrusy spicy tea which I absolutely adore, but you can use any tea you like. Or coffee, or chocolate, just infuse the flavour into the milk and you’re golden! This particular creme pat is actually a bit thicker than I like in a choux, so normally you can whip up some whipping cream and fold into the creme pat once it has cool down a bit, but I didn’t have any whipping cream. I found this recipe to make a substitute. What it is, is basically some milk with gelatin thickening it, so while it won’t be a good whipping cream substitute for every occasion, in helping to loosen up this creme pat it is the perfect thing. Though, it did make this not vegetarian friendly. :<

2. In a pot, combine water, butter, sugar and salt. Bring to a boil.

3. In a separate bowl weigh out the flour. Pour the boiling butter water mix into the bowl and mix the flour immediately. Mix hard and mix fast into a nice smooth dough that pull away from the edge of the bowl. 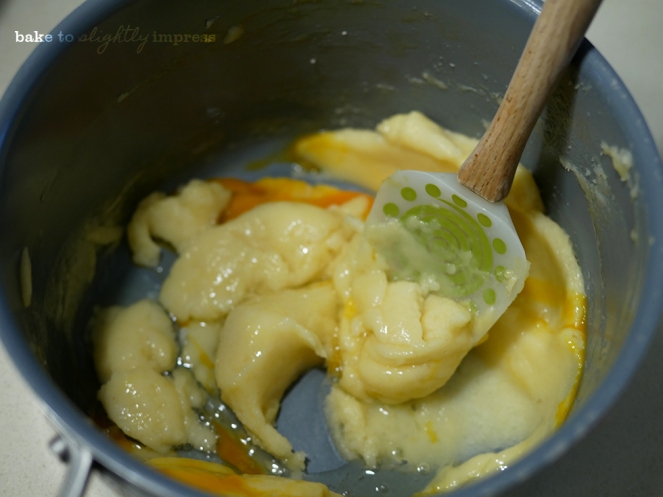 4. Once you have your smooth dough. Add in the egg, one at a time. Each egg needs to be fully incorporated before you add the next in. It is a scary moment when you mix the egg in and you can see the mixture break, don’t worry. Keep mixing, it will come together again.

5. Keep mixing until when you pull the spatula up, the mixture drops in a v-shape. That is the correct texture of the pastry.  If it is too runny it will not pipe correctly and will not puff up properly.

6. Pop the mixture into a piping bag and just cut the tip off to the size of your liking. Pipe out little mound of pastry on a sheet of baking paper or mat. Space them between each other because they are going to grow and puff. If there is a little peak in your piping, you can smooth it down with wet fingers.

7. Bake for 15 minutes to brown the exterior. Then turn the heat down to 175°/350°f and bake for another 25-35 minutes. What you want is for the choux to dry completely inside, so depending on your oven you might have to bring one out and cut it open to see if it is done.

8. Once they are done, take them out and put them on a cooling rack. You can poke a hole in the pastry to let any extra steam escape for a crispier bun. They need to be completely cool before you can fill them. They can keep in an airtight box for a few days, or, freeze them immediately, they can crisp up in the oven at 175°c for around 5 minutes before use. 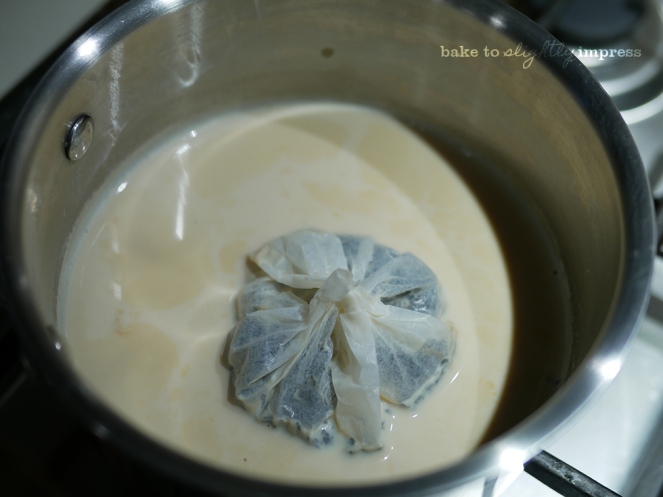 1.  Warm milk up in a small saucepan, don’t let it boil. Put the tea leaves in to steep. You can strain the tea leaves out later or I put them in a coffee filter because I am lazy.  Let it steep as long as you like. Once it is steeped to your liking, remove the leaves and bring the milk back to almost boiling.

2. In a separate bowl, whisk the yolk and sugar together. Sift both kinds of flour into the yolk mixture.

3. Ready your whisk, pour the milk mixture into the yolk mixture and DO NOT STOP WHISKING until it is well mixed. Then, return the mixture back into your saucepan, and cook until low heat. Don’t stop whisking until it is nice and thick.

4. Set the mixture aside to cool, make sure to put clingfilm all the way down to the surface of the mixture to prevent a skin from forming. Cool to room temperature.

5. Put your creme pat in a piping bag with a round metal piping tip. Stick the tip in the side of the pastry and fill it up. You will feel the choux bun goes from air light to … heavier. Careful not to overfill it, it may explode. 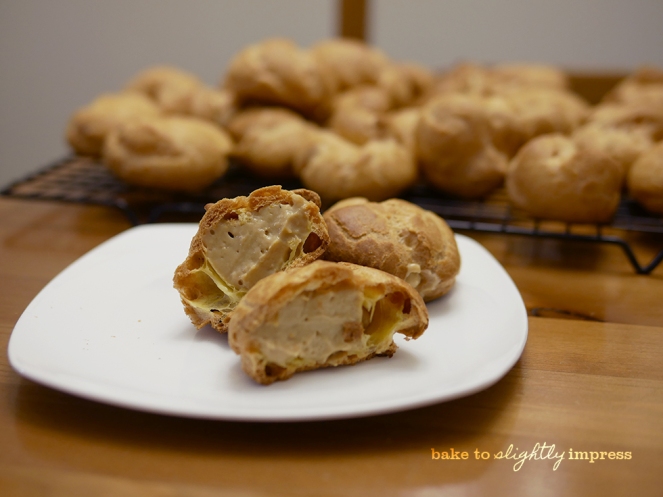 And you’re done! You can eat the whole plate, it is so light. :>

View all posts by baketoslightlyimpress